I first started talking about toggle tax when I started working with Mio in 2018.

It didn’t have a name back then but we recognized that switching between apps all day had a detrimental effect on both our brains and our pockets.

It was obvious that, when enterprises have multiple messaging apps, the time spent navigating from one app to another was causing a disconnect between employees and taking at least a few seconds to get to where they desired.

Add to that the amount of context switching as we suffer each time we enter a new app and the disadvantages of this toggle tax extend from our pockets and reach our brains.

It also became clear that in-app some apps suffer from this standalone.

One of the first blog posts I wrote for Mio was about Microsoft Teams guest access. In here, I discussed the experience for guest users; a common way for contractors to collaborate with businesses using Teams.

At the time, and yet to be remedied, if a contractor had three clients using Microsoft Teams, they had to toggle between tenants (the industry name for separate Teams instances) using a log-out/in process.

Not only did this take rather a long time but it was a frustrating experience for users. So toggle tax has been around for quite some time.

What is toggle tax?

Toggle tax is the term coined by Rohan Narayana Murty, Sandeep Dadlani, and Rajath B. Das, in a report shared in 2022.

It became compulsory reading for the entire Mio team.

After studying 20 teams, totaling 137 users, across three Fortune 500 companies for up to five weeks, a conclusion was that workers toggled roughly 1,200 times each day.

In context, this is 9% of their working day.

Why are we talking about toggle tax now?

In August 2022, an article titled “How Much Time and Energy Do We Waste Toggling Between Applications?” appeared in Harvard Business Review.

It was a compelling read backed by scientific research and opened with the damning statement of hitting Alt-Tab comes as naturally as breathing. 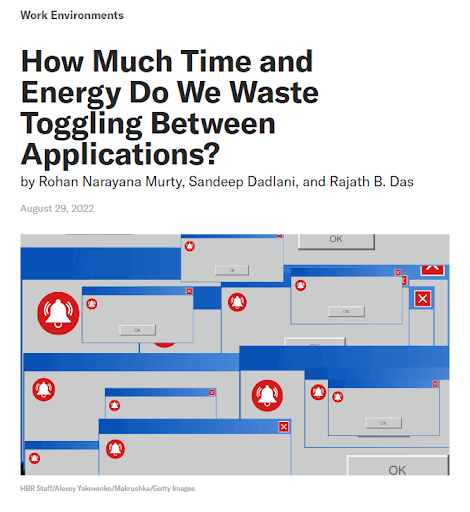 An example given was:

“To execute a single supply-chain transaction, each person involved switched about 350 times between 22 different applications and unique websites. Over the course of an average day, that meant a single employee would toggle between apps and windows more than 3,600 times.”

The study then went on to relate the amount of time spent toggling to a numeric amount that businesses lose out on.

What we’ve known, but not talked about, for the longest time is now tangible if you do the right math.

App switching is taboo but has become the norm. But adding the word tax, and proving its genuinity, means everybody is taking notice.

When put in perspective, we can use these examples…

If Mary, a senior marketer, earns $100,000 per year, $9,000 of the cost of employing Mary is spent on switching between applications.

Why is everyone talking about toggle tax now?

Quoting the HBR article, Oded writes, “employees spend almost four hours a week reorienting themselves after toggling between applications. By giving users the ability to access their email alongside other modalities, Zoom reduces this toggle tax and enables users to better focus on their work.”

This was Zoom’s largest product announcement at its annual conference.

But why only now?

In 2018, a report by RingCentral was covered in a Forbes article. The headline this time was Workers Waste 32 Days A Year Due To ‘Workplace Efficiency’ Apps.

The overall sentiment is the same. Spending time switching between apps wastes time. Time, in business, has always equated to money.

So why are we only taking toggle tax seriously in 2022?

Because, through the growth of remote work, it’s become blatantly obvious that we switch between apps too often.

Employees are afraid to step away from their keyboards in case they’re seen as slacking off.

As a result, we sit at our desks for longer than optimal and feed the toggling beast.

When we toggle between apps, we switch contexts. In our brains as well as our computers.

What can we do about toggle tax?

The obvious answer is toggle less.

If we all had the focus and attention we think we have, we’d be working task by task and never switching contexts or apps.

Add to that notification from social media, email, personal messages, delivery at the door, and our dog needing to go outside, and we’re doomed.

Can technology solve the problem it created?

Through apps like Appy Pie, Zapier, and Mio, teams are able to create integrations that allow a platform to replicate or trigger an action on another platform.

While this might sound like duplication, the action of sending the action to the other platform lessens the amount of app switching as you don’t need to switch to keep up with everything that’s going on.

“Companies don’t buy software from one vendor anymore. They buy it from a thousand because the number of categories has just become too big.” – Cal Henderson, Co-Founder of Slack.

While there will never be a single platform to get all your work done, it’s important to consolidate the majority of your work into the space you feel most comfortable.

While there’s a lot to be said about forming new habits, change is hard.

“On average, it takes more than 2 months before a new behavior becomes automatic — 66 days to be exact.” – James Clear, Atomic Habits.

Yes, we can commit to becoming more aware of when we’re creating a problem for ourselves.

Yes, we can close our apps down when we’re done using them.

But something will slip through the cracks.

The combination of integrative technology and a commitment to bettering ourselves is the only way to beat the toggle tax.

How Nifty can help you solve the toggle tax issue

Nifty is an all-in-one app to unite teams, goals, and actions in one place. The tool helps you stop switching between Roadmaps, Tasks, Docs, Chats, & other tools. For example, you want to create a project roadmap for a new feature launch.

You can simply create a project under the name of the feature launch. Next, you can create a milestone to outline the most important to meet deadlines: 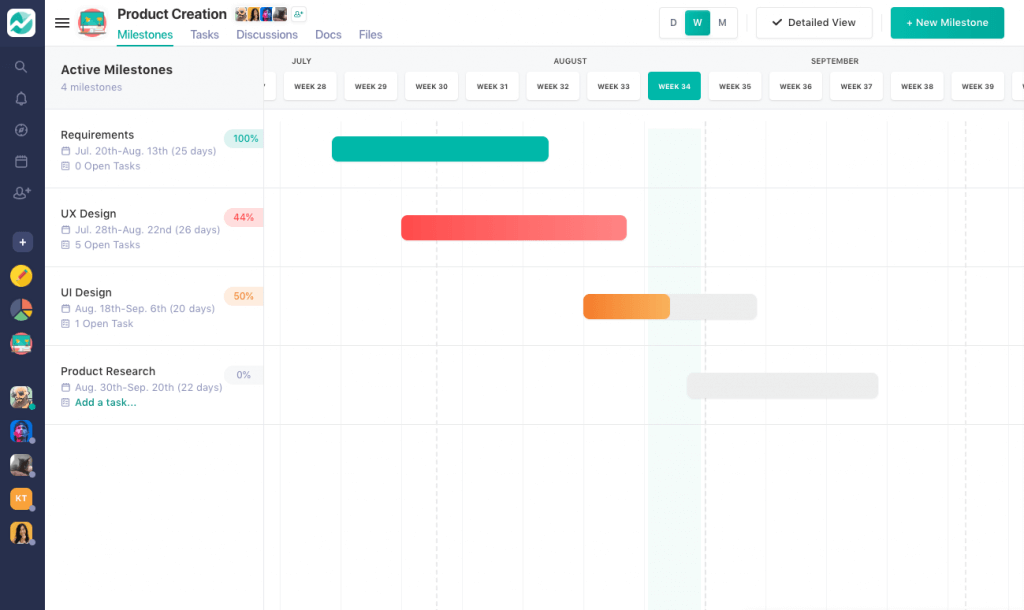 Then, you can add relevant tasks for each of these milestones and assign the respective assignees to it, and you can chat with them at the same time: 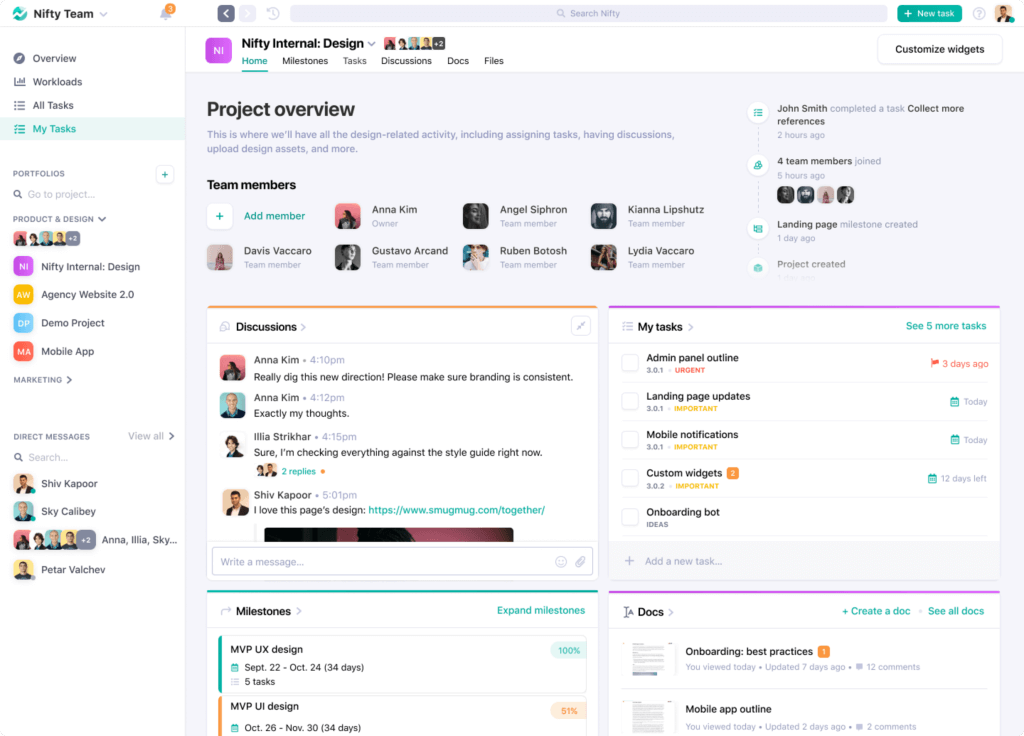 By combining all these things in one place, Nifty can help you save that 9% of the time that you spend switching between apps.

Nifty is totally free to use with all the features you need to lower your toggle tax. Give it a try for free!